On this page we have tried to answer questions you might have about the ranch. Click on each subject for more information.  For additional information, please see our Contacts page. 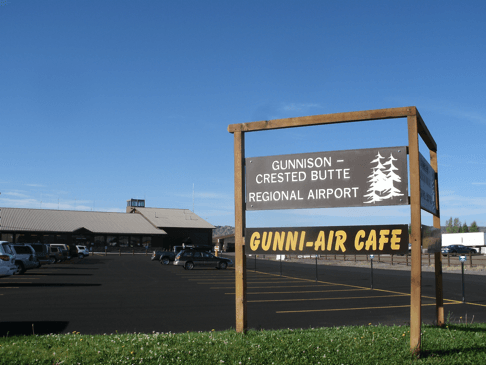 Gunnison Airport is very convenient– only a 20-minute drive from much of the ranch. It is a small, friendly airport, with flights to Denver in the summer and to Denver, Chicago, Dallas and Houston in the winter. There is also service for private aviation, and Hertz, Avis and Budget rental car facilities. In addition, the Montrose Airport, an hour and ten minutes away, provides connections to Denver, Dallas and Houston in the summer and Denver, Chicago, Oakland, Los Angeles, Phoenix, Newark, Dallas, Houston, and Atlanta in the winter. There is also a bus service to Denver and Grand Junction.

Stop in Fairplay for some Java Moose coffee and keep an eye out for the town’s pet three-legged elk, Tripod. 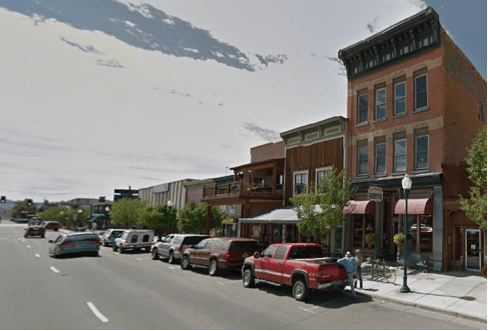 Gunnison is the county seat and has a small university, an excellent weekly newspaper, a movie theater, a lively community arts center, several art galleries, as well as many other amenities surprising for its small size. The library receives so much local support that it is expanding to a larger location. The schools are good, and the area is a wonderful place for children to grow up. There are tennis courts, a golf course, walking paths, sledding runs, an indoor and outdoor skating rink, and a wonderful museum of the old west, the Pioneer Museum. For more about Gunnison life, see the photo album page of the Gunnison Times.

Gunnison is home to the Gunnison Valley Hospital, an excellent small community-owned hospital less than 15 minutes from much of the ranch. It has qualified again this year as one of the top 100 rural hospitals in the United States. Gunnison Hospital and Aspen are also the only two rural hospitals in Colorado in the top 100 nationwide for Critical Access. Because of the healthy outdoor lifestyle in the region, we are able to attract top people, and Gunnison doctors and nurses are not only highly qualified, but love their work.

The hospital offers an operating room for surgery, hospice services, an oncology unit providing high-quality local cancer care, physical and occupational therapy, and a 24-hour emergency room. To quote from the GVH website,

“Gunnison Valley Hospital is a Level IV Trauma Center and local physicians staff the Emergency Room 24-hours a day, seven days a week. General surgery, orthopedic and OB/GYN consultants are available on an on-call basis. The ER department is supplied with state-of-the-art equipment necessary to meet the demands of any patients with ailments ranging from bronchitis to multi-system trauma. Tri-State CareFlight offers flight for life helicopter service to Gunnison Valley Hospital.”

Alternative medicine is also alive and well in Gunnison and there is an osteopath, an acupuncturist and a chiropractor as well as other practitioners.

Besides a number of good restaurants in Gunnison, there is an excellent large supermarket 15 minutes from the ranch, where you can find not only steak and potatoes, but also more exotic things like fresh ginger and tofu, arugula and green tea, grits, Alaska king crab, and gourmet ice cream. There are also health-food stores, liquor stores, and a local-produce market where you can buy grass-fed beef. Every Saturday in the summer, Gunnison holds a farmer’s market where you can buy peaches from just over Kebler Pass, local meat, bread, vegetables and fruit, arts and crafts, herbs and plants. The Ruby Theater on the Western campus shows first-run movies in a new state-of-the-art 3-D facility. 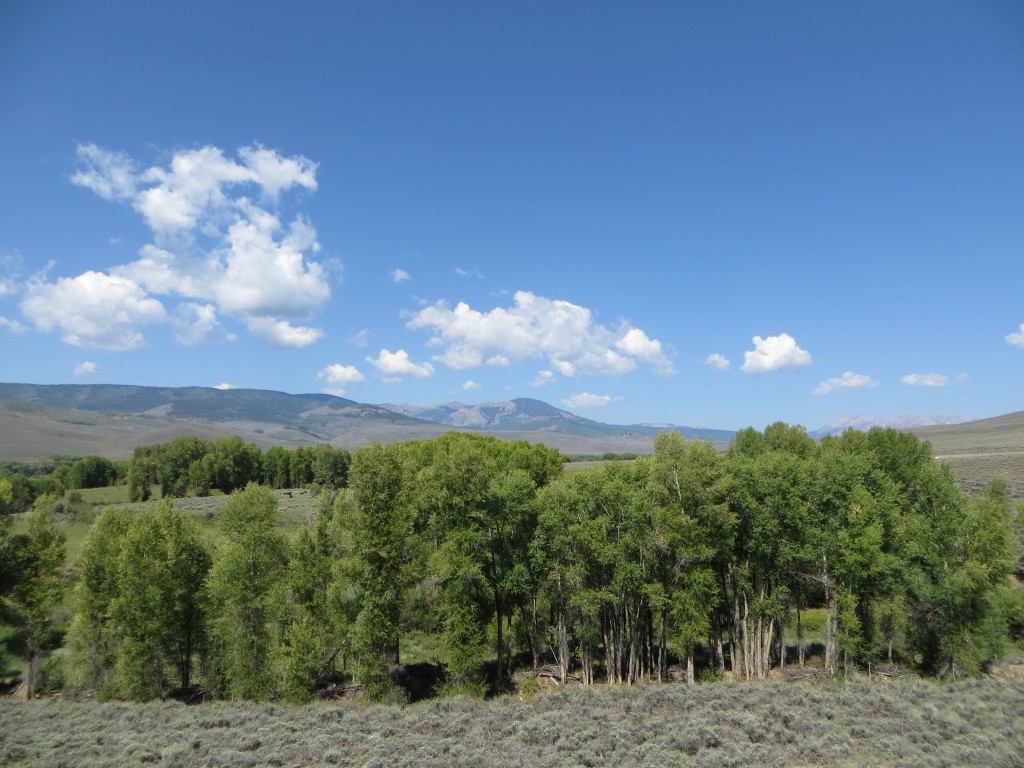 There is no denying that Gunnison weather is on the cool side. You will find that at 8000 feet up, the ranch is cool at night even in the summer, and summer doesn’t really arrive till June. But days in summer can be in the 80s and almost always feature a cloudless blue sky, except during the brief “monsoon season” of August– which means an almost-daily shower for half an hour or an hour in the afternoon. The lack of humidity means that even the hottest day is never uncomfortable. 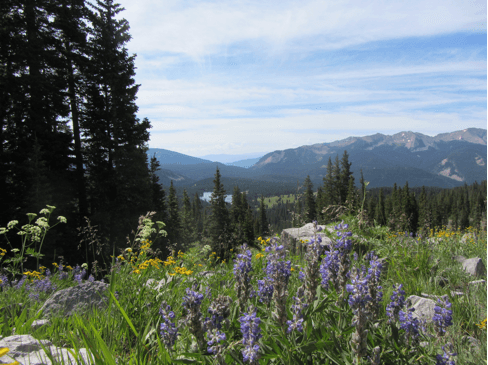 In June, July and August, there are wildflowers everywhere. July is the most spectacular month for flowers but some persist until late in the fall. 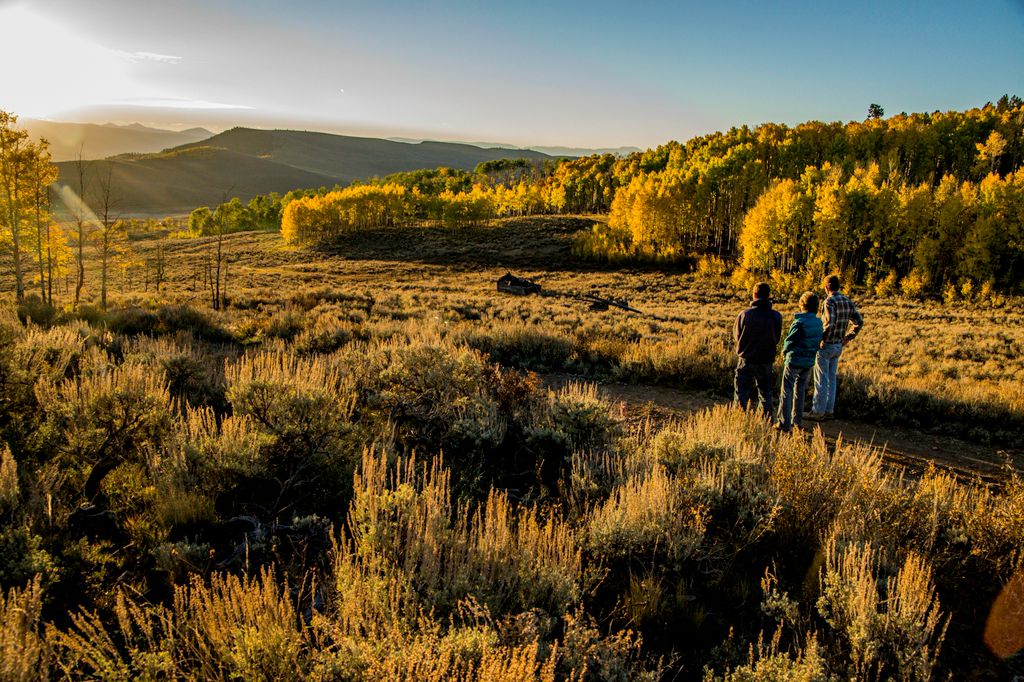 The fall is glorious at Eagle Ridge, with beautiful long days of blue skies, golden aspens and red willows. The animals are eating a lot to prepare for the winter, the elk are mating, and you are most likely to see them at this time.

Winter at Eagle Ridge features two kinds of days: soft, mild, and snowy, or cold with a flawless blue sky and crystal-clear views up to 100 miles away. Homeowners learn to appreciate both kinds of weather. Again, the lack of humidity means that the cold of Gunnison is far more comfortable than the same temperature in Chicago or New York. 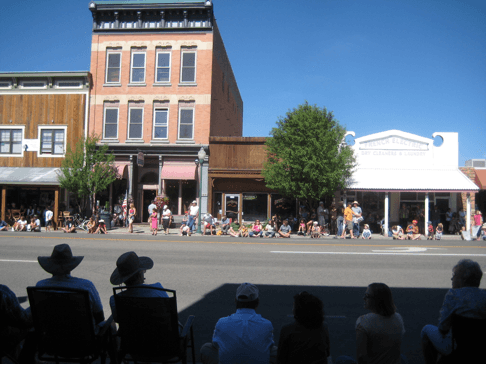 Gunnison is a town of about 6000 friendly, well-educated people. The presence of Western State Colorado University (the former Western State College) brings young people into town and there is an active adult education program, as well as lectures and musical performances. The college and the high school have well-attended games. At least one newcomer we know decided to move to Gunnison after watching our picturesque Fourth of July parade, a whole-hearted piece of western Americana, the like of which you won’t see in many places any more.

The rodeo is a major event in July. Cattlemen’s Days, recently called one of the top 101 Western events by American Cowboy magazine, is the oldest rodeo in the United States– it was founded in 1900. The whole town turns out, sometimes dressed in pink for the “Tough Enough to Wear Pink” breast cancer campaign. It’s something to see a whole slew of cowboys in pink lassoing cattle. In 2013 alone they raised $1 million to help local patients. 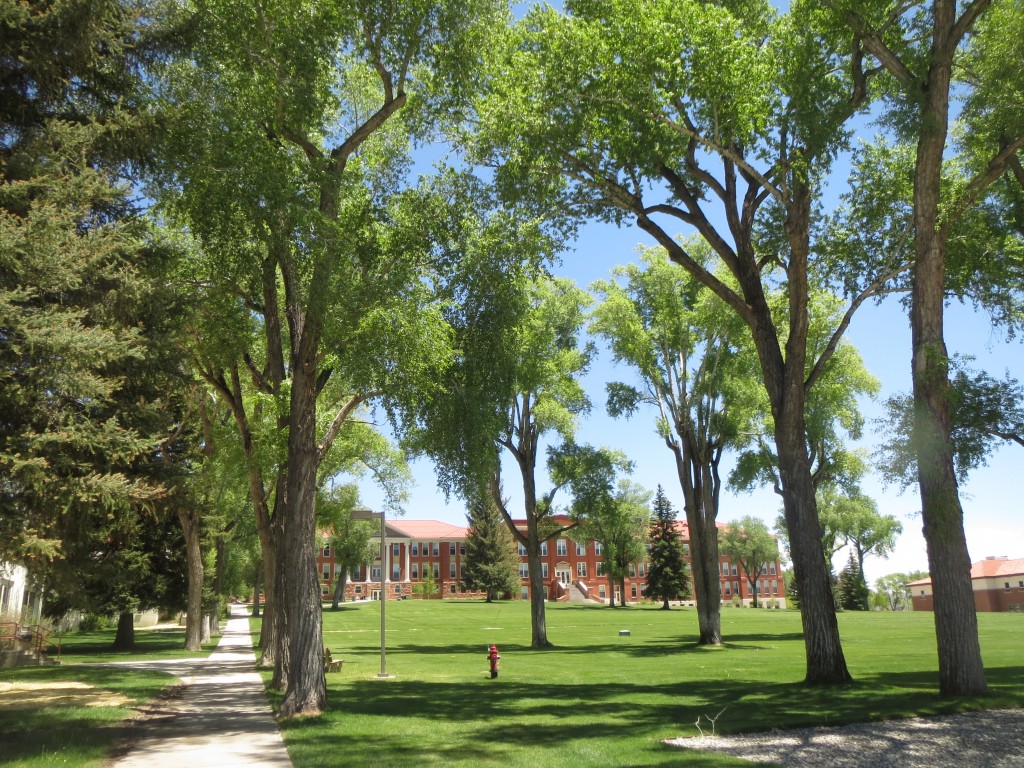 There are good cafes and the W, where locals go for breakfast or lunch. Gunnison has an excellent library that is so popular it will soon be moving into much larger quarters; tennis courts, a golf course, a bookstore, several art galleries and a lively arts center, and the Pioneer Museum, which features dozens of Old West buildings. In the winter, the indoor and outdoor skating rinks are one of the most popular places in town. The college makes for a lively atmosphere and there are cafes, gyms, dance studios, bars, and a number of good boutiques. However, if you are looking for nightclubs, Dior, Chanel, high heels or business suits, this is probably not your place. Although Ralph Lauren has been spotted at the yearly Gunnison Cattlemen’s Days, the oldest rodeo in the U.S.A., which takes place for a week in July each year. 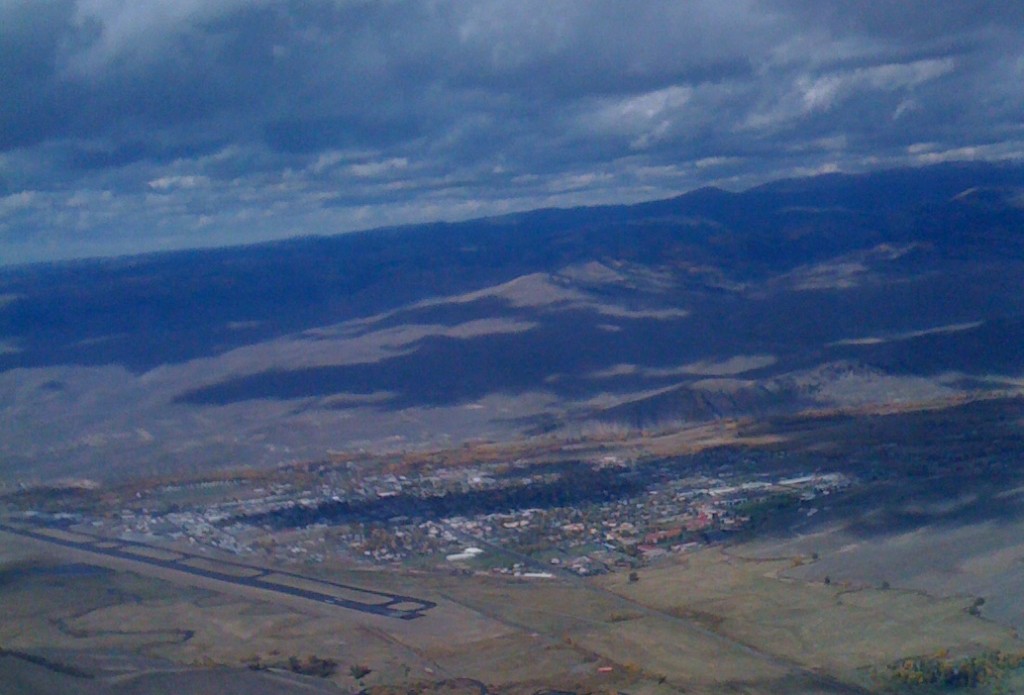 It’s a friendly town, where it’s easy to meet people of all ages, no matter where you come from. Because it’s the county seat, it’s convenient. Gunnison also has an excellent weekly newspaper to keep you up to date on all that is going on locally. And you can even hear classical music on the local NPR station.

Crested Butte, a 40-minute drive from the ranch, is our other local town. 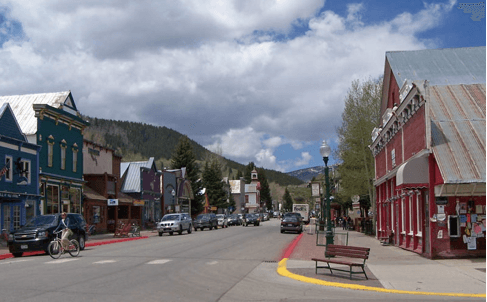 Crested Butte loves to party! Every few months, it seems, there is another art fair, festival, bonfire, race, or celebration that entices everyone near and far to walk the pretty main street of this picture-perfect small town. Elk Avenue, the main street, is a historical preservation district, with its Victorian-vintage western buildings now occupied by restaurants, bars and shops. In the summer, things are especially busy, with the Crested Butte Music Festival, Wildflower Festival, a wine and food festival, and the Tour de Forks, where local people open their houses for a Crested Butte chef to raise money for the Center for the Arts. In the fall, there’s a film festival and a mushroom festival, as well as a harvest festival called Vinotok. And at Christmastime, you have never seen a more Christmassy sight than Crested Butte in the snow, with the local businesses serving cookies and hot cider. 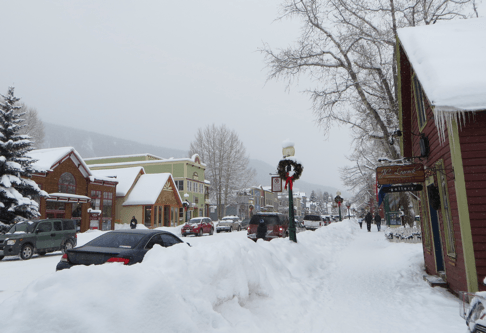 Crested Butte was born as a mining town, and the miners built small houses that have often now been expanded, and painted in a riot of colors. After the mining died out in the 1950s, the town became an artists’ haven, and in the 1960s attracted hippies, craftspeople, foodies, and outdoors types who didn’t want to pay the prices or deal with the mentality of Aspen, which is only 25 miles away as the crow flies (but three to six hours by car, depending on the season). The ski resort at Mount Crested Butte opened in 1960.

This year Crested Butte won Powder magazine’s prize for best ski town in North America. Its uncrowded lifts, good restaurants and bars, and crystalline powder snow helped win it the award. The town has also won the award for the most Santas skiing at one time. It’s the kind of town, wrote Powder, “where you can move in without knowing a soul, and four years later, become the mayor.”
Crested Butte and Gunnison are wonderful resources for the homeowners at Eagle Ridge Ranch.

Gunnison Country Times, our excellent local weekly newspaper. You can get an online subscription

Cattlemen’s Days Rodeo, the oldest in the U.S.A. Don’t miss the parade!

USA Pro Challenge Bicycle Race has been called the US answer to the Tour de France. But it’s harder and higher! This year (2014), Gunnison has the honor of starting Day 3 of the race, which brings together some of the world’s top bikers.

Crested Butte News, the also excellent weekly newspaper of CB. A highlight is the police blotter which regularly features bears and tourists who ran a stop light.

Montrose Airport is an hour and 10 minutes from Gunnison, with service all year to Houston, Dallas-Fort Worth, and Denver; in winter also to Newark, Chicago, Atlanta, and Phoenix-Mesa.

Creede is a cute mining town over the mountains from Lake City. Its Repertory Theater (in summer) is professional and attracts people from a hundred miles around.

Monarch Mountain ski area is an hour from Gunnison